The first wave in test automation is fulfilled with great vendor tools such as WinRunner, Silk Test, which offered a springboard for a significant breakthrough later - Selenium. However, the truth is that you may hear testers muttering a curse about vendor tools: flaky tests and sluggish maintenance processes. Selenium initiated the second wave in test automation, which shifted the focus towards software programming and development when generating a test. 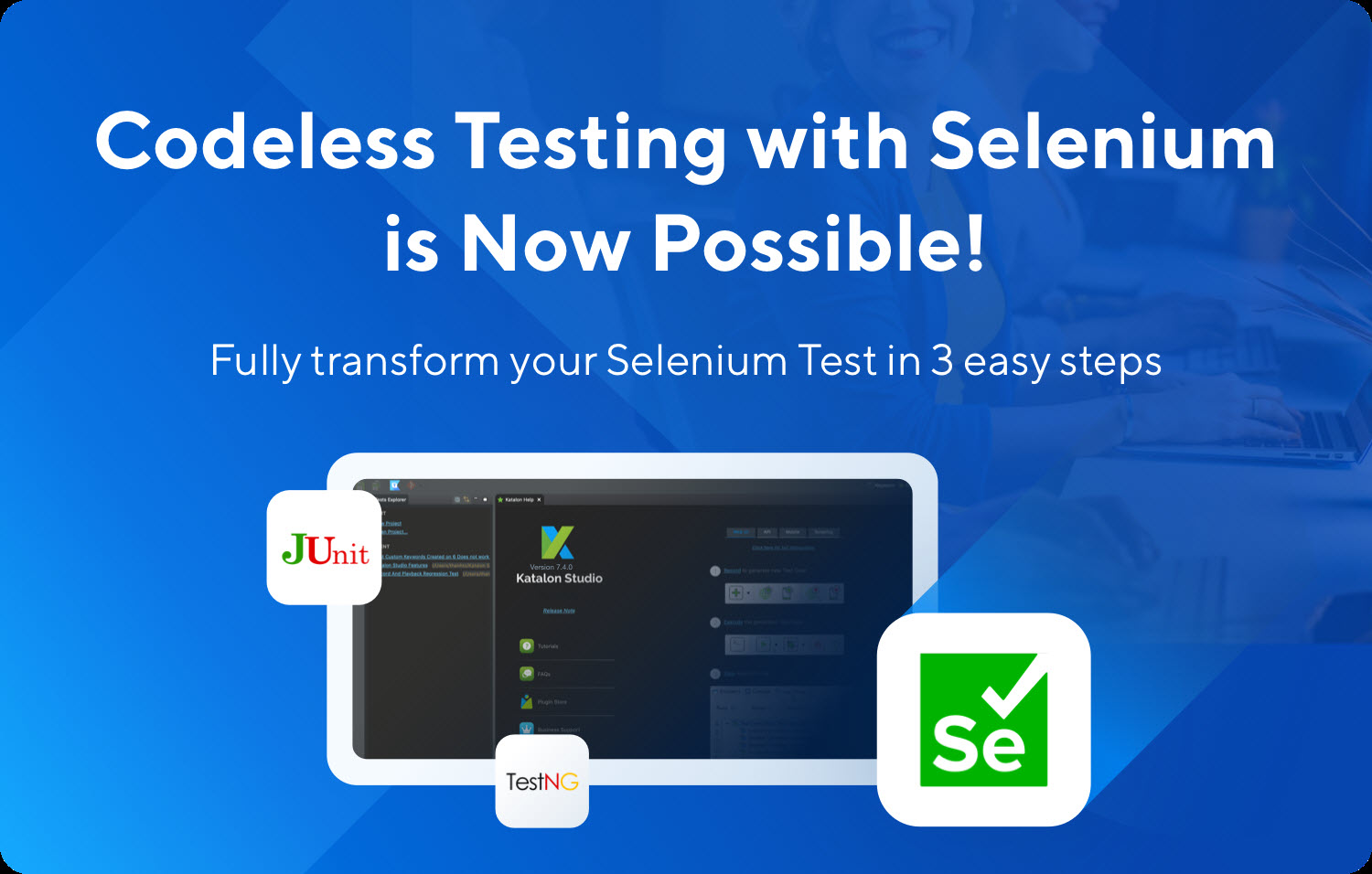 The current buzz these days is around Agile and DevOps. A Gartner study indicated that 90% of companies worldwide were expected to broaden test automation to Agile and DevOps. On the other hand, 50% of them are still grappling with the problem of high technical expertise, productivity, and resources required to excel in more demanding tasks. As a result, more and more alternative solutions came along as a response to this.

Why Do Businesses Prefer Selenium for Automation Testing?

Over a decade, Selenium persists in holding its ground as an open-source portable automation testing framework for web browsers. Selenium is capable of automating a browser with specific bindings for testing purposes. It consists of four tools for different reasons: Selenium IDE, Selenium Grid, Client API, and WebDriver. Especially with the Selenium IDE plugin, users can record and export tests effortlessly in numerous programming languages like C#, Java, JavaScript, PHP, Ruby, and so on. Most importantly, Selenium flexibly integrates with different development platforms like ANT, Jenkins, TestNG across all browsers involving Chrome, Firefox, IE, Safari, Opera.

Why Do We Need an Alternative?

Only perform tests on browsers

Selenium suffers from a major setback that it can only perform predefined actions on a website or other applications running in a browser. Unfortunately, it is utterly oblivious to API interaction. In other words, there’s no way to have Selenium directly invoke API calls. If you want to automated testing mobile, desktop applications, or even on the API level, please use another tool to integrate with Selenium, such as Selendroid, for the Android mobile operating system.
“Quality at Speed” is the peaking norm in software development, which means testers and QA specialists want to deploy a quality product quickly, of course, with less cost. In traditional models, there have been odds and ends affecting the testing process. But now, with the full DevOps/Agile model, it has become smoother and more effective, especially shortening the development cycle. Simply put, customers are moving towards tools with more simple setup, but still fully functional to deliver products rapidly.

Selenium WebDriver saves plenty of time for developers in running their web applications. The testers are required to have the in-depth technical knowledge to scrutinize their testing skills with Selenium. Therefore, despite a plethora of programming languages, not every user masters technical skills to customize and maintain those projects in line with product development. Plus, even with the help of some third-party tools integration, it’s not easy for beginners to configure their test scripts on operating systems like Microsoft Windows, Apple OS, and Linux.

Lack of technical support from experts

As mentioned above, Selenium is an open-source automation testing tool, which means some uncommon Selenium problems or custom requests depend entirely on other users. Even though online resources like tutorials, forums, and consultation are always available, those usage guides are community-based, not fully reliable help from professional developers.

Lack of AI-driven and image-based testing

Recently Google CEO stated that “We are moving from a mobile-first to an AI-first world.” Global enterprises are rushing toward “AI-driven” testing tools. Hence, some new capabilities such as image-based testing, AI/ML, and scalability were born as a response to more complicated user behavior over time. If you are a Selenium user, it’s fundamental to apply a third-party AI-driven tool that allows cloud-based testing, dynamic content, and self-healing locators for all UI elements, to remarkably simplify the maintenance process.
Nevertheless, some Selenium alternatives, such as UFT, Katalon Studio, provide built-in components to capture images for visual testing based on the pixel-to-pixel comparison. Specifically, check the size, font, style, color and UI themes, insightful charts, and dashboards, particularly updating daily UI adjustments for a faster UI testing process.

The Next Generation of Katalon Studio - Came to Handle Selenium Tests

Selenium is soaring dramatically in the test automation industry as giant enterprises widely adopt it. There has been an increasing number of vendor tool providers that work around the Selenium framework as a wrapper by combining Selenium WebDriver with the backend architecture. They not only address the challenge of advanced programming skills, shorten the development cycle, but also highly accessible to scaling teams.

One of those notable perks built on top of Selenium and Appium is Katalon Studio. It is a comprehensive test automation solution covering Web, API, Desktop, and Mobile app testing. Since version 7.4.0, Katalon Studio revolutionizes the use of Selenium tests by migrating them in either TestNG or JUnit framework to this tool, which eliminates any technical complexities. Then how does the latest feature help your team?

Recently, Katalon Studio won many testers and industry leaders' hearts due to its simplicity in terms of both configuration and usage. With the advent in 2015, Katalon Studio has made the learning curve of automation beginners relatively simpler and become one of the best tools for quick and effective test creation.

Katalon Studio is an all-in-one solution that facilitates test automation for web, API, mobile, and desktop applications on whichever operating system, either Windows, macOS, or Linux. It also offers a set of seamless integrations with SDLC management, CI/CD ecosystem, team collaboration applications, etc. So, if the needs come, you can leverage more features and optimize your test automation strategies at Katalon Store - a well-known plugin and extension marketplace.

Chosen by over 600 favorable feedback as one of the 2020 Gartner Peer Insights Customers’ Choices for Software Test Automation, Katalon Studio is ranked at the top of the codeless testing industry.

CI/CD-enabled and TestOps easily run tests on the cloud

Katalon Studio has been expanding to support the growing ecosystem of CI/CD tools and the DevOps model. Just install built-in plugins or even create custom plugins, Katalon Studio is here for all your testing needs. Meanwhile, it’s a real challenge for Selenium to execute and maintain tests simultaneously on the cloud.

As Katalon Studio was developed on the base of Selenium, it simplifies the way integrated automation is delivered for testers. Users can extend their projects on the CI/CD pipeline with some prominent platforms SauceLabs, LambdaTest, BrowserStack, to name but a few. Or they even enjoy more native integration plugins like Jenkins, Bamboo, CircleCI, Azure DevOps, for projects at scale.

Maximize ROI for teams at any stage

Katalon Studio provides a significant leap for teams from diverse functions who are looking to transform their organizational culture towards a more jointly collaborative mindset. Native Cucumber BDD support and other improvements empower teams to optimize test automation efforts for all teams, thus keeping track of all project executions.

Above all, Katalon TestOps paves a pathway to smoother team collaboration by giving results visually through charts and dashboards as soon as finishing tests on the cloud. As a result, a bigger picture of test data analytics during the project is provided to users, so you don’t have to worry about test execution planning anymore.

How to Migrate Selenium Tests to Katalon Studio

1st step: Select the Selenium project of your choice to migrate.

Note: You may need to add Java dependencies of your project to .gradle file. Learn more

2nd step: Copy and paste the source code of the selected project to Katalon Studio.

3rd step: Well-done! Now you can execute and expand your Selenium tests with Katalon.

Read more for the full tutorial and sample project.