Assertion helps to confirm that server under test returns the expected result. Assertions allows us to define the pass/fail criteria for application under test. We can configure what kind of assertions is active for every test plan.

Example, if a web response doesn't contain an expected expression, it would be considered as a failure.

We can add more than one assertion to the test plan, sampler, controller or thread group. Failed assertions will cause all affected samples to fail. i.e. If the main sample is successful and the sub-sampler fails, then the status of the main sample will be set to failed status.

Here is a list of available assertions in JMeter:

The most commonly used assertion is 'Response assertion' which allows user to add pattern strings comparing against various fields of the response.

Response Field to Test , instructs JMeter which field of the Response to test.

Example - HTTP Responses with statuses in the 4xx and 5xx ranges are resulted as 'unsuccessful'. The "Ignore status" checkbox can be used to set the status successful before performing further checks.

Pattern Matching Rules, Indicates how the text being tested is checked against the pattern.

Equals and Sub-string patterns are plain strings, not regular expressions. NOT may also be selected to invert the result of the check.

Patterns to Test, A list of patterns to be tested. Each pattern is tested separately. If a pattern fails, then further patterns are not checked

By default, "Response Field To Test" is set to 'Text Response'. Here when we select 'Text Response' Which checks for the response text from the server, i.e. the body, excluding any HTTP headers.

and "Pattern Matching Rules" is set to Sub-string - Which returns true if the text contains the pattern string (case-sensitive).

Now Add pattern to test as shown in the below image. 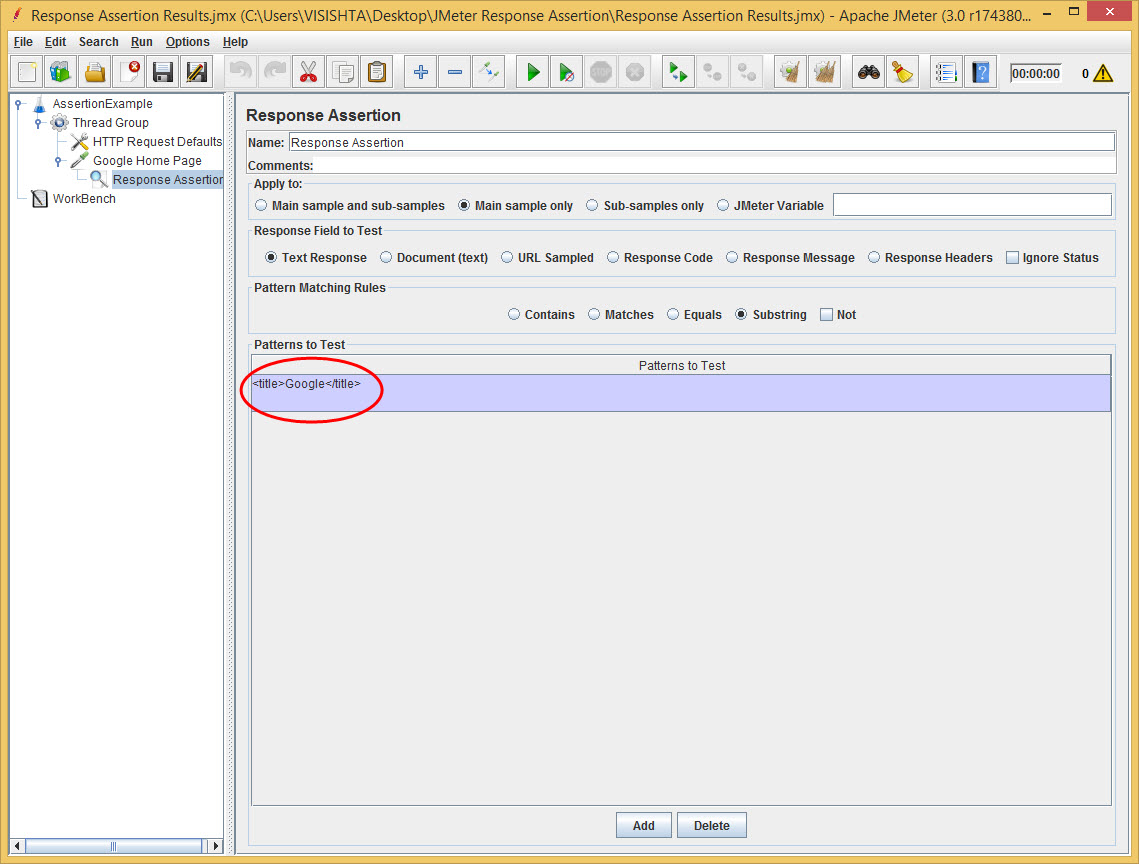 Step 5. To view the assertion results, we need to add an Assertion Listener to the Thread Group

After all the above steps are done, it should look like below : 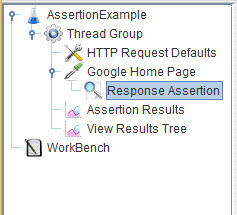 Step 7: Now Save and Run the Test Case

Below is the Assertion Results look like, If the response is failed, it will display a message as 'Response Assertion : Test failed: text expected to contain title 'Boogle'. Here instead of Google, changed it to 'Boogle', As the response data will not have this text which results in Failure. 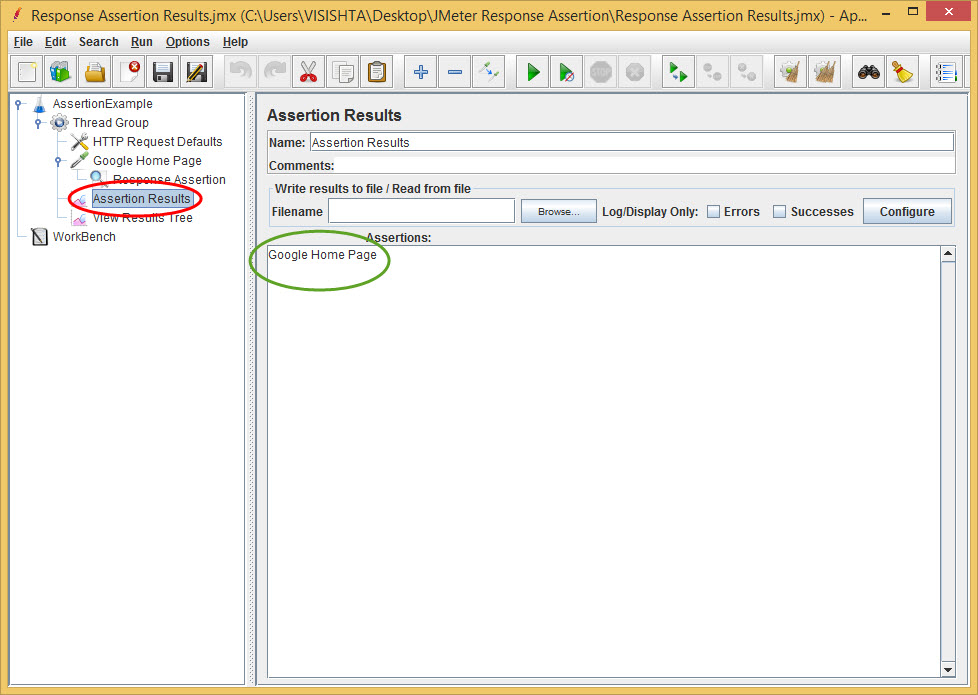 Below is the 'View Results Tree' look like, To confirm manually, try to search for Google in the response data as shown in the image below 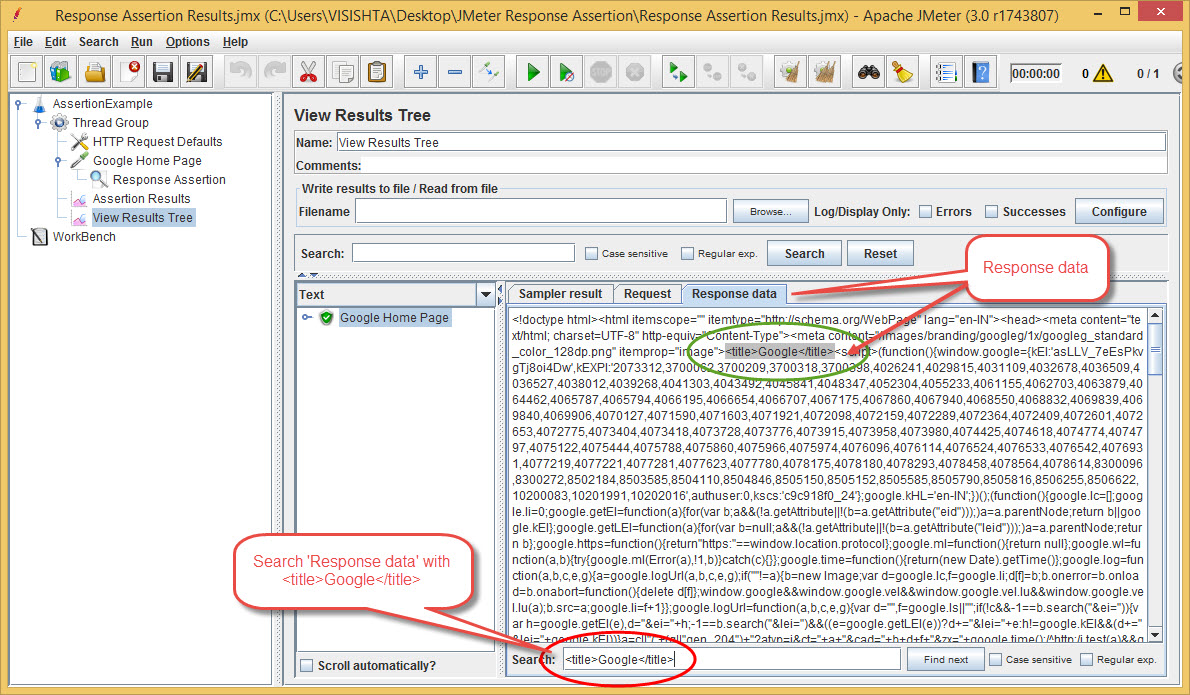 In the Same way we can also use Response Code - which checks to ensure the response code is expected. In the above example At step 4, at Section 'Response Field To Test' - select 'Response Code' and add pattern to test with status code '200' as in the screen shot below.

Please you try to Run by choosing different response field to test. Feel free to comment below if you face any issue with Assertion.

Hi am trying a sample script for a web application which is local to our environment.I am trying to give "response Assertion" with Field to Test ="Text Response" and Patterns to Test= <title>My Company name</title>.But Test Results shows failure even though
response data has this <title>. It shows below results.Same script i tried on google.com it works and passed.
I would like to know if JMeter works for any webapplication of any technology used. As our company uses Angular JS ,.Net Technology