Appium allows us to execute our tests on both real devices and emulators/simulators. We have seen earlier on how to execute tests on real Android Devices. However, we may not have enough real devices to test always with different versions of android. In such cases we can use android emulators that emulates real device software, hardware and OS.

To run emulator, First we need to define an AVD which defines the hardware characteristics of the emulator like Device, Target API, CPU/ABI image and other options. So here Android Virtual Device (AVD) is a configuration that defines the characteristics of an Android phone, tablet, Android Wear, or Android TV device that you want to simulate in the Android Emulator.

The AVD Manager is an interface you can launch from Android Studio that helps you create and manage AVDs.

Step 2: - Click on Create Virtual Device, at the bottom of the AVD Manager dialog. 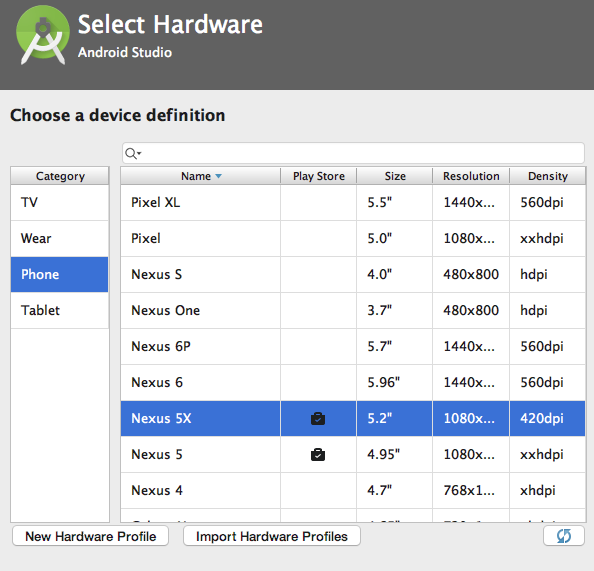 Step 4: - Select the system image for a particular API level, and then click Next.

The Recommended tab lists recommended system images. The other tabs include a more complete list. The right pane describes the selected system image. x86 images run the fastest in the emulator.

Step 5:- Give any name to the device and click on Finish.

Now the devices will be displayed under the Android Virtual Devices with play and edit options. Now Select the AVD name and click on Start/Play icon uder actions section.

The default value is 5554 for the first android virtual device instance running on the your machine. If we launch an other emulator, it will be assigned with an even numbered port after 5554 i.e second emulator will be assigned with port 5556. In the same way we can initialize more than one AVD at the same time and a maximum of 16 AVDs.

Android avdmanager is a command line tool that allows to create and manage Android Virtual Devices (AVDs) from the command line. An AVD lets you define the characteristics of an Android handset, Android Wear, or Android TV device that you want to simulate in the Android Emulator.

The avdmanager tool is provided in the Android SDK Tools package (25.3.0 and higher) and is located in android_sdk/tools/bin/. 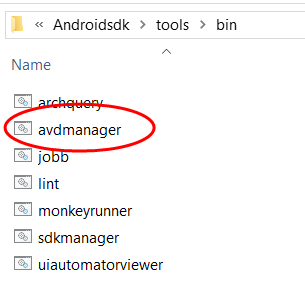 Based on your requirements, you can change API level / ABI etc.

Below are few commands to view available targets, device definitions, or AVDs. If you do not specify target, device, or avd, avdmanager lists all three.

Here's the basic command-line syntax for starting a virtual device from a terminal prompt. (Navigate to tools folder where emulator )

Let's view the avd that we have created, enter following command

To print a list of all emulator options, including a short description, enter this command emulator -help

The Android SDK includes an Android device emulator — a virtual device that runs on your computer. The Android Emulator lets you develop and test Android apps without using a physical device.

Once you have the Android Emulator booted or an Android Device connected that is running an AVD with API Level, then run Appium on the command line (via the appium command)

Your test script should ensure that the platformVersion capability corresponds to the emulator or device version you are testing, and that the app capability is an absolute path to the .apk file of the Android app.